LUN G (Lunar Gabbro) For Sale LUN G - Mare Gabbros This class of lunar meteorites, lunar mare gabbros or "LUN G", is represented by Asuka881757, NWA2700, NWA2727, NWA2977, NWA3160, NWA773 This class consist primarily of plagioclase (in the form of Anorthite) and pyroxene (in the form of Pigeonite and Augite), with minor accessory minerals such as iron-titanium oxides and sulfides. The Yamato 793169, is a polymict breccia that was initially misclassified as a polymict eucrite. The Asuka 881757, is a coarse-grained cumulate; a typical gabbroic rock representing one of the few unbrecciated lunar meteorites. 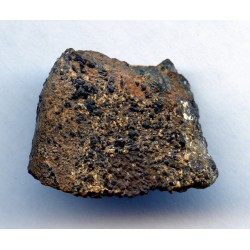