The NWA 8694 is a Chassignite, the third martian meteorite of this type (Chassigny, the type name fell in Chassigny, Haute Marne, France, on 3 October 1815). As noticed by Roger Hewing, the NWA 8694 has typical chassignite petrography (abundant olivine, interstitial pyroxenes and melt inclusions in olivine. See the meteorite bulletin http://www.lpi.usra.edu/meteor/metbull.php?code=61276 The martian meteorite Northwest Africa 8694 (NWA 8694) is a single stone, almost entirely covered by fusions crust. Petrography and classification: (Roger Hewins, Sylvain Pont, Brigitte Zanda, MNHNP) This meteorite is a cumulate dunite with 85% highly fractured olivine, classified as a chassignite. As the textures and mineral assemblages are almost identical to those of Chassigny and NWA 2737, the olivine and pyroxene compositions are intermediate between those of Chassigny and Nakhla. 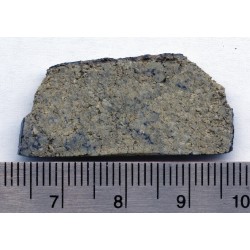