Allende is a Carbonaceous Chondrite classified CV3 (Vigarano Type). Allende fell on 8 Feb 1969 near the town of Pueblito de Allende in Chihuahua, Mexico. Carbonaceous chondrites are among the most primitive of meteorites. The most distinctive characteristic of the CV meteorites is the presence of large irregular white inclusions. They are called CAIs (Calcium-Aluminum Inclusions). CAIs have been intensely studied. Unusual isotopic ratios in the elements of these inclusions suggest that some of the material forming the CAIs came from preexisting interstellar grains that mixed with the forming solar nebula. CAIs are certainly among the oldest material in the solar system. 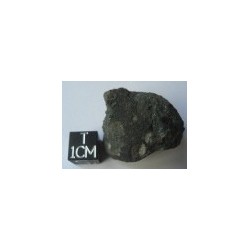