Enstatite Chondrites for sale E Group (Enstatite Chondrites) / Enstatite Meteorite E Chondrites Synonyms: enstatite chondrites, Daniel’s-Kuil-like chondrites General: The chondrites of this group are named for their primary mineral, enstatite, and they differ in many respects from ordinary and carbonaceous chondrites. Similar to the ordinary chondrites, the enstatite chondrites have been further subdivided based on their content of total iron; members of the EL group contain less iron than members of the EH group. Moreover, there are mineralogical and petrologic aspects that separate the two groups. Description: The EL chondrites show petrologic types 3 to 7, and there is a distinct peak at the equilibrated type 6. The members of the EH subgroup exhibit petrologic types from 3 to 6 with a less distinct peak at the unequilibrated type 3. Mineralogy: Whereas virtually all pyroxenes found on Earth, the Moon, and in other meteorites contain both magnesium and iron, enstatite is almost iron-free. The iron found in E chondrites, which accounts for 15 to 25% of their mass, is in a metallic state. Stranger still, many elements that normally reside in silicate minerals are found instead in sulfide minerals with the result that enstatites contain a wide assortment of uncommon sulfides. Even the metallic iron has up to several percent of silicon. Moving silicon to metallic iron requires a very reducing, oxygen-depleted environment. Formation history: The E chondrites are the most oxygen-poor objects in the solar system. They must have formed in an oxygen-depleted environment because nearly all of the iron in E chondrites is present in its reduced, metallic form. Even the pyroxene is depleted in iron, and consequently, it is only found as the pure magnesium-rich end-member - enstatite. Origin: Despite the differences between EH and EL members, most researchers believe that both subgroups originated on the same asteroid, most probably representing different layers of the parent body. Some scientists think that we should look for that asteroid inside the orbit of Venus or even Mercury since the E chondrites formed under highly reducing conditions in an oxygen-depleted environment. Other researchers suggest that a formation in the inner asteroid belt would have provided the same conditions in the early solar system. A more recent comparison of the reflectance spectra of different asteroids to the spectrum of the EH chondrite Abee suggests that the main belt asteroid 16 Psyche might be the common parent for the enstatite chondrites. Members: After taking into consideration all of the possible pairings among the meteorites recovered in the strewn fields of Africa and in Antarctica, approximately 150 different E chondrites have been identified. Historic witnessed falls include famous meteorites, such as Abee, Indarch, Saint-Sauveur, Daniel’s Kuil, and the more recent fall of Neuschwanstein. More popular finds include our own discoveries, i.e., the EH3 chondrites of the Sahara 97 series, such as SAH 97072, SAH 97079, SAH 97090, SAH 97091, SAH 97158, and a couple of smaller pairings. More about enstatite: Enstatite chondrites (also called E chondrites) represent only 1.0% of all falls. They have the highest free metal and sulfide content (23-35% by weight) and the lowest oxidation state of all chondrites and their silicate phase is almost purely enstatite (MgSiO3, iron free pyroxene). On the basis of their free metal and sulfide contents, a distinction is sometimes made between EH and EL chondrites (H for high, L for low). Petrologic type for enstatite chondrites range from 3 to 7. Enstatite are rare chondrites and most E chondrites are of the E6 petrologic type only few are EH3. It is theorized that the E chondrites formed in an oxygen-depleted environment, possibly near Mercury's orbit. 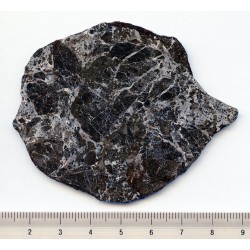 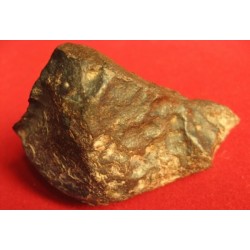 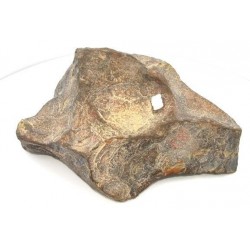 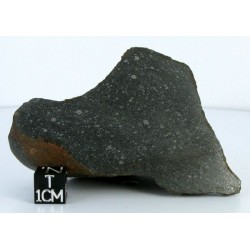