Isheyevo is a unique metal-rich carbonaceous chondrite. The Isheyevo meteorite was classified as a Bencubbin-like meteorite. The Isheyevo meteorite weighing 16 kg, was discovered in October 2003 in Bashkortostan (Russia), close to the Isheyevo village. The stone was found by a tractor driver in a field during harvest carrying. The bencubbinite or CB chondrites are metal-rich carbonaceous chondrites. The CB are divided into two subgroups: -The CBa subgroup included the meteorite type Bencubbin found in Australia, Weatherford found in USA and Gujba an observed fall from Niger. CBa chondrites are coarse-grained (up to 1cm) and contain 40-60 vol% of FeNi metal. -The CBb subgroup included the HH237 fund in Libya and the QUE94411 found in Antarctica. CBb chondrites are fine-grained and richer in FeNi metal (>70 vol %). CBb’s also have CAIs, zoned metal grains and matrix lumps Isheyevo is close to CHs and supports the genetic unity of the CR-CH-CB clan. In comparison with CHs, all CB’s lack POP chondrules. 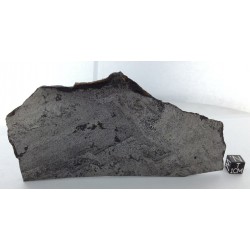